Buy-to-let is simple – you buy a property and you rent it out, right?  Wrong!  Successful buy-to-let is backed by a science that is based on business fundamentals which have been refined over time since the first brick was laid on the first investment property ever built.  There are seven fundamentals to property investment:

To understand these fundamentals we need to go back, way back, to when the first property deals were taking place.

A long time ago, when there were no homes people used to live in caves.  When the caves became in short supply man had to seek shelter elsewhere so he had to build a home.  Now, I imagine there were no building firms in those days – let alone cowboy builders!  So man had to build his own home, with his own sweat, with whatever materials he could find.

Now, there was this one man, Romulus, who had to build his own home.  He found out that he was actually quite good at it.  In fact he realised that he was better at building homes than actually hunting and gathering food.  There was another man, Remus, who noticed this as well.  Remus used to admire his home, it was far better than his, but noticed that Romulus’s family didn’t have much to eat.

Remus was good at hunting but not good at house building so Remus approached Romulus and made him an offer.

“What will I do with 200 deers?  After 3 months my family and I would have only eaten 10 deers and the rest will go stale” Romulus replied.  “How about you give me 2 deers a week for the next 5 years”

Remus thought about it and thought it will not take him more than 2 hours per week extra to meet Romulus’s quota but if Remus tried to build his own home it would take twice as long and be only half as good.  So Remus agreed.

This deal, or something similar, was the first property deal that ever occurred.  Romulus evaluated what he would get out of it relative to what he put in.  So what did Romulus actually put in?  Romulus has invested his time – about 3 months worth.  What has Romulus got out of it?  Well, 2 deers a week for the next 5 years – probably equating to 6 months worth of Romulus’s time.  So there is a clear profit element to this transaction of 3 months.  It could be 1 month or even 5 months worth of profit but there is no assurity that it will be 3 months.  Romulus had to make an estimation.

[Chapter 1 deals with yield, what it is, why it is important, how to calculate it, what to compare it to and key thresholds that should trigger you to buy]

After Remus’s house was built word spread.  He got approached by many in the community to build them homes in exchange for resources.  Romulus was building homes as fast as he could physically build them in return for animal skin, metal, wood and tools.

Soon Romulus had a well fed, well clothed and well housed family due to his efforts of house building and the ‘rent’ he was receiving.

Romulus was now earning more than he could use so he decided to use the excess to pay other men to build more homes.  Before he knew it Romulus had a fully fledged building company making him enough resources – without actually having to build any homes himself!

Things were not all rosy however.  Some of the people were not keeping to their side of the bargain.  Romulus would not get the full quota from his residents as first agreed.  He would get 1 deer instead of 2 a week, sometimes none.  Romulus realised that if he was to pay his workforce on time and in full and maintain his family he would have to take on someone to ensure that all the quotas were paid in full and on time.

Romulus knew of Conan.  He was a strong and well respected man.  He approached him to collect the quotas in return for a share of what he collected.  Conan agreed.  Soon all quotas were being met in full and on time.  Romulus’s building company was becoming a strong force and the homes he was building were better due to the amassing of other resources other than just food.

The key to Romulus’s continuing success was MANAGEMENT.  Romulus realised that not only did he have to calculate what he’ll get back but also that he’ll be able to collect it.  If you invest money you need to know that you’ll be able to get a return – for real!  Theoretical profits can easily become a real loss.

[Chapter 2 deals with managing the people surrounding you namely: You, The Bank, The Tenant, The Letting Agent, Your Employees, The Contractors, Your Solicitor, Your Mortgage Broker, The Local Authority, The Freeholder & Managing Agent, Your Accountant and The Law.]

Back to Romulus’s story.  A few years later came the introduction of money.  Money avoided all the hassle of doing deals in terms of food, wood, metal etc.  Now Romulus wanted to grow bigger.  He was growing by simply re-investing his earnings into wages to build more homes, but Romulus was ambitious and wanted to grow faster.  With the emergence of money came the money lenders.  Romulus met up with Barclay, a local money lender, who offered to lend to him to enable him to build 10 times more homes per month at the cost of 1 home per month.  Romulus agreed to this and soon the land was filled with Romulus’s homes.

Romulus’s rapid expansion was due to his willingness to borrow.  He realised that he would grow a lot quicker if he borrowed.  He evaluated the cost of borrowing and found there was a pay off by borrowing.  Its what’s known in the game as GEARING.  Gearing is key to business, but even more key to property.  With the use of manageable long term debt he was able to structure the cashflows so that he could pay the money lender and builders and still make some money on top.

[Chapter 3 deals with gearing increases your return, how to make infinite returns, how to achieve 100% financing, the cost of holding money and the opportunity cost of money]

Due to the success of Romulus’s building company he found that his homes dominated the market.  Properties that he had originally built were coming up for sale.  The prices being charged seemed quite low in comparison to what he was paying out to build them.  It was in Romulus’s interest to buy these homes and rent them out than to actually build them and sell them on!  So Romulus decided to start buying homes rather than build them.

Romulus was aware of the market enough to change his strategy.  You have to be aware of the whole market surrounding you to ensure that you are making the right business decisions.  This is what I call AWARENESS.

Due to population movements he was seeing certain areas fall in value as well as rise in value due to the increased and decreased demand for properties in that area.  Romulus would watch these movements and predict the areas which offered growth of his investment.  He realised that if he could buy a property and make a gain without actually having to do anything it would be easier to make even more money.

APPRECIATION is money for nothing.  It’s the easiest way to make money.  It’s the ability to predict the way the market is going.  This is very difficult to do as there are many variables involved but you can make informed predictions over the short, medium and long term.

[Chapter 5 shows you how to get capital appreciation without foresight, with foresight and potential, explains what negative bubbles are and how they make you rich and how to calculate the immediate profit from an extension or loft conversion]

Romulus had bought in predominately two areas.  This is because he knew the areas well and did not want to cast his net too far.  However, there was a terrible flood in one of the areas wiping out all his properties in that area.  Romulus’s wealth had been halved.  He had to reduce his living costs to accommodate for this tragedy and his expansion plans were blighted.

Romulus had put all his eggs in two baskets!  He did not understand how to mitigate his RISK and thus not apply amongst others, the principle of diversification being the science of spreading your investments over different uncorrelated markets.

[Chapter 6 shows you what systematic, leverage and specific risk is, how to eliminate these risks where possible and manage what remains]

Romulus was old now.  He had many houses but he was too old to run and manage them and his off springs showed no interest.  He approached Barclay and asked him if he knew anyone that would be interested in purchasing his business.  Barclay suggested that he sells at the right time and get all the right statistics that would attract the right buyer.  6 months down the line he approached Barclay again and presented him his business.  Barclay found a buyer within 3 months.

With the monies realised he invested it in Barclay’s bank on a long term deposit account and Romulus earned a healthy interest for him and his family risk free.  A happy ending to Romulus’s story.

With any investment you need to know when you will EXIT.  Its knowing when to sell and getting the most for your investment.

[Chapter 7 shows you what is a hotspot, cooling spot, coldspot and warmspot and why you should only sell in a cooling spot]

So we know the seven most important factors when it comes to property investment – lets get in to the detail.  Now these factors are not sequential.  You do not need to master them one after the other.  All of them have to be understood and applied to get the most out of your investment.  You need to think about all of them as a whole to ensure your success.

This book is NOT about how to do buy to let.  You will not find out about the nitty-gritty of renting of properties or buy to let mortgages like types of tenancy agreements or discount tracker mortgages.  This book is for the investor that’s already taken the plunge and is in the property game.  It will prompt you to think about the wider aspects of buy to let, the variables involved and how to understand and exploit them. 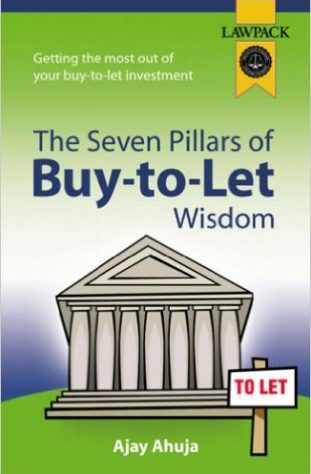 (A BOOK BY AJAY AHUJA)