The lights are glaring, almost blinding Toby. They’re shining so brightly that Toby can’t see the cameramen or the crew, gathered around on the other side of the cameras. He can hear them though, talking amongst themselves and fine tuning their equipment. The interviewer clears her throat and Toby looks back towards her. She’s looking towards the side of the stage, where the producer and the director are standing, talking to someone on the end of a walkie talkie. Someone starts to call out numbers before going quiet and holding up their fingers, slowly counting down.

“And we’re back with football star Toby Arnold,” the interviewer said suddenly as the fingers disappear. Toby jumped at the sudden silence that filled the studio, “So Toby, I think we all would love this question answered. Did you do it on purpose?”

Toby freezes, his mind racing. He can feel the anger boiling up inside of him. He takes a deep breath, closing his eyes and trying to calm himself down.

“Of course I didn’t,” he says, choosing his words carefully, “I’ve said this before and I’ll say it again. I never meant to do it on purpose. Why would I? It was an accident. We all have them, we all make mistakes.”

“Yes but it was a very stupid mistake,” the interviewer replied, “And let’s be honest, looking back it really does look like you did do it on purpose. What was going through your mind at that exact moment?”

Toby’s nostrils flare. He takes a deep breath. He can’t believe that this has come up, again. The interview had been going well so far, for 5 minutes before the show’s break they had had a nice conversation and discussed everything that they had agreed upon before Toby had come on the show. He looks at the interviewer, she’s on the edge of the seat, leaning forward and staring at him intently. He looks away from her, away from the cameras and towards the producer. He’s still stood where Toby had been, before the interview had started up once more.

“I thought this show was about plugging upcoming movies,” Toby said sharply, “Not the Spanish Inquisition. We’re here to talk about movies, and filming behind the scenes, not my past.”

He starts to remove the microphone from his shirt. The interviewer is trying to talk to him, to calm him down, but he doesn’t want to know. He pulls and tugs at the wires. The interviewer touches his arm and he looks at her sharply.

“Look,” he says, “this is just unprofessional. You need to know what to bring up and what to leave out, if you want to get the most out of your guests. If they think you’re going to bring up the mistakes of their past, no matter how much they might have put it behind them, people aren’t going to want to come on here. All this sensationalist reporting isn’t going to work with me, I know what you’re trying to do and I won’t be any part of it. I told your bosses that right from the outset.”

Toby tosses the microphone and pack on to the seat where he had previously been sitting and turns away. He walks off the stage, leaving the interviewer sitting on the set with her mouth moving up and down. She looks like a fish and absolutely terrified. Her eyes flick towards the producer, before she slaps a fake smile on her face and returns her attention to the camera and the auto-cue beneath it.

The producer tries to stop Toby, several other crew members reach out and call to him but the young man isn’t listening. The shame and guilt and embarrassment are burning in his stomach, making him feel sick. He can’t believe that they’ve brought it up again, the worst moment of his life so far.

The interviewer is referring to the own goal that Toby scored during the FA Cup replay at the Manchester United home ground three years ago. The game had been shown live on BBC 1 and the goal had completely changed his life. He doesn’t know yet whether the change was for the worse or for the better.

This is the story of Toby, the greatest star to ever come out of Skelmerage. 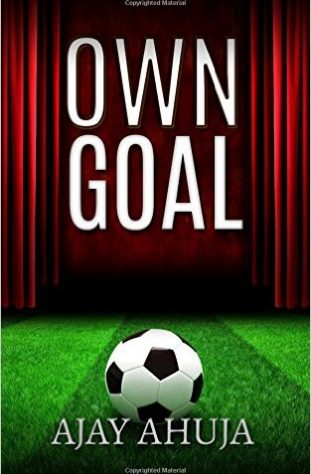