I should first tell you what I am not:

I am not a computer science graduate

I am not an IT consultant

I am not a computer programmer

I am not a reclusive internet geek

I am not computer trained in anyway

The first computer I got was a BBC Micro Model B when I was 13 years old and all I used it for was to play games.  All subsequent computers I got were for playing games (even though I convinced my parents it was for my studies!) up until the year 1999.

The computer I got in 1999 was a second hand office computer which I bought for £200.  I had just recently left my full time job and I had got so used to surfing the internet and emailing my friends at work I couldn’t really do without one.  I had left my job to pursue a music career as well as start my own businesses.

By year 2000 I was using the internet a lot to find investment properties around the UK.  I reckon I was one of the first people to use rightmove.co.uk, a estate agency portal where you could conduct property searches and get results made up of all the estate agents registered with rightmove.  It would save you a lot of time because you needed to perform the search only once and rightmove would aggregate all the results and display them on one page.  6 years on this site got a Stock Exchange listing valuing the company at over half a billion pounds!

Anyway back in 2000 I would use rightmove to find hotspot areas to invest in as I would perform a search for a property based on my criteria (anything under £40,000) and see what came up.  When something came up I would visit the area and all the estate agents in that area including all the estate agents that were not registered with rightmove and buy everything I could afford.  I made a lot of money on the back of this as I would find areas with cheap properties which I would buy, rent out and get a good return.

Now don’t ask me why but I felt a need to tell everyone what I was doing.   It was so simple.  I would view a property on rightmove’s site, travel to the area, place offers on several properties, raise 100% of the finance with my mortgage broker, buy the properties and let them out.  Everything I was buying would rent out and appreciate in value enabling me to buy even more.  It was at this point I got the idea of writing a book.

So I got on my computer and composed a letter headed “How To Achieve £100,000 p.a. Through Property” and I wrote the contents page for my idea for the book in this letter.  Then I got on the internet and searched for book publishers.  I knew nothing about how to get a book deal I just thought I would make communication with them and see what happens.  I faxed 18 publishers and 3 responded!

Eventually I did a deal with my first publisher, Lawpack and in 2001 I wrote my first book about property investment called “The Buy To Let Bible”.  I had no formal writing training.  I simply wrote as I spoke.  Today it is the most sold book on UK property investment and is often quoted by property professionals.  I’d like to think I have made a few millionaires from people reading my books.

Not content with my first book I contacted other publishers with my idea “147 wake up calls for financial success” and at this point I came in to contact with How To Books.  A publisher which published books that helped people achieve what they want to achieve.  They were considering my book idea and after much deliberation How To Books refused to publish it!

The boss of How To Books phoned me up and politely informed me it wasn’t for them.  I then launched in to my sales speech about how I could link the book up to a text messaging service, do this, do that, do whatever so that it would sell.  I think the boss liked my sales speech and agreed to squeeze me in between 2 meetings to talk further.

I met the boss and his wife and we got on.  I showed them my ideas and even though they were impressed they still were not convinced.  I also mentioned another book idea off the cuff called “The A to Z of Buy To Let Hotspots”.  As soon as I mentioned this idea the boss said:

I was a bit surprised at how quick he came to that decision since we had been negotiating the butt out of the other original idea.  However – who am I to challenge his request for my off the cuff idea!  So my second and third books were born:

Again, these were a success when they were released however since the property market was moving so fast the book became outdated very quickly.  Then I had an idea.  Why don’t I create a website that gives the reader a hotspot every month.  This meant even though the book went out of date the website will not.  And if we promote the website in the book we can get readers to convert in to subscribers of the site.  So my first site was born in October 2003 called propertyhotspots.net.

Since I knew nothing about computer and programming I paid around £4,000 to get the site constructed.  It was a members only site and I charged £24.95 for 6 months access and £37.95 for 12 months access.  I had no idea how to promote the site but after a chance conversation with a guy, named Adam (who became quite significant further down the line) who I had advised previously about property investment, told me about Google Adwords.

I will tell you about Google Adwords later in this book but within 2 hours of using this system I had my first customer!  And then the customers just kept on flooding in.  After a few weeks I started thinking I’m selling the site too cheap so I increased prices to £34.95 for 6 months and £49.95 for 12 months access.  But there was no slowing down of customers.  So after several price increases the price levelled out to a £20 per month charge.  Within 4 months all development costs had been recouped and I started making a profit.

So by mid 2004 I had confirmed in my mind that you could make money on the internet.  My only problem was the cost of bringing new ideas to the internet.  If I was facing a £4,000 spend with my internet developers every time I had an idea (which I had many of) then the risk of losing money shot up.  This is because I would have to make a major investment each time I came up with an idea and I would have no idea of the outcome.  And this was in fact true.  The next 2 ideas I launched flopped and I was roughly £8,000 down on internet development costs.

I realised I needed a cheaper way of creating websites.  So I approached one of my friends who worked in IT to construct me some sites for £200 a go.  He did them and I promoted them.  The designs were a bit shoddy but they worked and brought in business.  The only problem was every time I wanted to change something I had to email him or call him with the amendments and then it would take up to a week before the amendments would be done.  And when the amendments were made they were usually wrong anyway!

By late 2004 I was getting really frustrated.  It was this frustration that led me to do a google search for “Website Builder” which led me to a website which changed my life forever!  This is not an over statement by any means.  I dreamt of the possibility of being able to think of an idea in the morning and have it on the internet by night earning money while I sleep.  This site enabled me to create a site online simply by dragging the mouse, clicking and typing.  Absolutely no coding was required.

So by the end of 2004 I could create my own websites within hours of inception of the idea.  Since then till now I have been creating sites surrounding a whole number of subjects and I have learnt many tricks, techniques and tactics that have made me a substantial amount of money.  I have gone through the trial and error process.  I have done the all night sessions working out where to click and when so the sites work.  I want to share my experiences with you so that you can skip the learning curve.

Now I will let you know this.  You will have to spend around $100 from the outset, around $100 per month ongoing costs and whatever you wish to spend on advertising to get it going if you were to employ ALL the strategies I mention in this book.  However you can start with no upfront cost, $10 per month ongoing cost and whatever you want to spend on advertising by doing the bare minimum of what I say in this book.  I’ll leave that up to you.  But I want you to consider doing the former strategy because lets face it: $100 upfront and $100 pm + advertising is NOT exactly a fortune considering what you can expect to get back.  If I said to you that you could start a million pound business with a few hundred dollars or thousand pound business with a few dollars – which one would you go for? It’s a no brainer really but I do not know your budget.

I am male, 34 years old, I live with my girlfriend and I have no children.  I work for myself and I have 170 properties worth £13m.  I also have my internet businesses which turnover around £1m a year which are all centered around property investment.

I have written 9 books on property investment and I am also a chartered accountant.  My interests are simple – business!  I’ve tried other pastimes but they just don’t give me thrill like business does.

So how do you do it?

There are many ways of making money on the internet.  I can tell you the way I did and still currently do but do not assume this is the only way to do it.  My formula is thus:

The hardest parts of the whole formula are parts 1&3.  And they will always be in business.  It’s products and services that are born from ideas that sell NOT websites.  Websites are just a medium for which you can display your products and services.  The rest is just procedure.

So lets start with the hardest part first Chapter 1 – Get an idea. 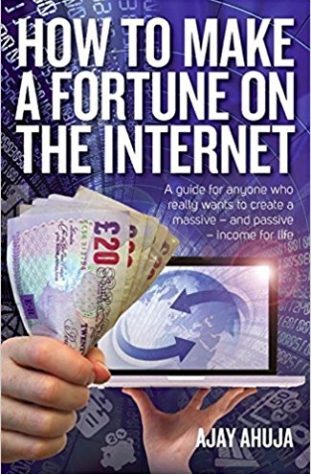