There are many investors that invest in property solely for the growth.  They are not concerned with making a rental profit (sometimes happy to make a rental loss!) but making an above average gain on their initial investment.  Annual Capital Growth (ACG) can be determined by:

Basically its how much your property has gone up by in a year of ownership.  For future years ACG is:

In simple terms it’s the difference between the value of the property now and one year ago.

This is because property is:

So a full understanding of the limited nature of land and the dynamics of the economy will enable you to see where we are in relation to the boom bust cycle.

Certain principles need to be explained before we enter the boom bust cycle.

If the availability of land was not restricted then real prices would fluctuate like this: 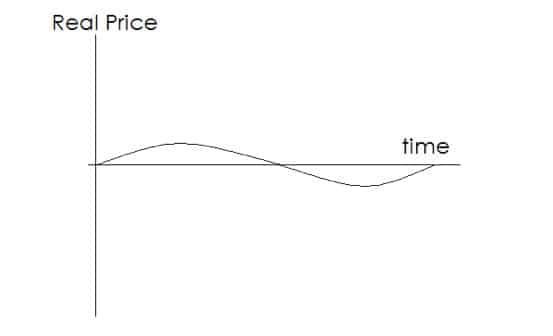 However, the availability of land to be developed on is restricted due to speculation, thus real prices fluctuate like this: 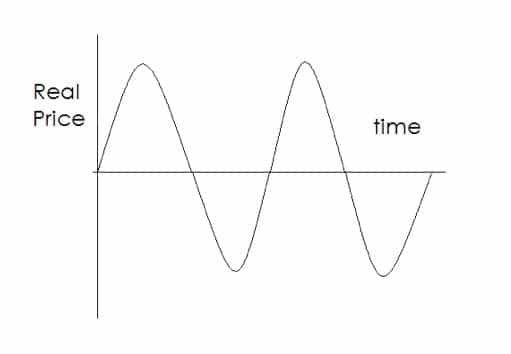 You can see that real prices rise and fall to a greater degree and over a shorter period of time.

The Start of the Boom

Okay so lets start at when everything is at a sensible price.  There are no rapid increase or decrease in prices, supply equals demand and so prices are stable.  As the population is growing so is the demand by businesses and individuals to buy commercial and residential property.  This means that:

This is what is supposed to happen but invariably doesn’t!  Certain land owners do not develop and hold out for even greater increases in value.  This in turn causes:

So in all, due to the limited supply of land, rising prices being seen by everyone and the number of property programmes or friend’s stories of how they made a small fortune, its only a matter of time before -  the property speculator emerges.  The speculator assumes that you can buy a property, do nothing and sell it in a year and make more than the average annual salary!

Middle of the Boom

Due to the introduction of the speculator, who is really only a novice investor, property prices are over predicted.  This means that:

because the speculator’s view is that the property’s value is heading in only one direction – UP!

As prices rise artificially high it encourages even more to be spent on them to gain a higher profit.  This results in people saving more, to invest in property, and thus spending less on the high street lowering overall consumption.  However this is masked temporarily by what’s known as the ‘Feel Good Factor’.

Due to some home owners feeling ‘richer’ they spend on the high street by obtaining unsecured debt such as credit cards or loans.  They know that the increase in the value of their home can be accessed, by remortgaging, if they struggle to meet the debt.  I’m sure we’ve all seen the newspaper and TV ads that dominate the advertising spaces offering all types of secured lending.  So consumption is maintained by credit provided by the banks.

Towards the end of the Boom

As consumption is now fuelled by over-borrowing, consumption increases to an all time high.  This causes a trade deficit to occur.  This is because:

So we end up importing more that we export thus creating a trade deficit.  A trade deficit is where imports exceed exports.  That is to say we buy more from abroad than we do from goods produced at home.  As a result the government cannot raise enough revenue through taxes due to companies not producing enough to tax so the government has to borrow to pay for its spending.  The only people that are willing to lend will be from abroad.  To attract investors from abroad the government gilt rate has to be increased.  This means raising gilt rates so that overseas investors will be attracted which ultimately results in rising interest rates.

Its not a pretty place at the peak!  The following misunderstandings and interpretations are occurring:

Something has to cause the crash.  Crashes do not happen overnight but they do happen a lot quicker than a boom.  Think of a roller-coaster.  You know that bit where you hiked up by the machinery to the top of the slope, you can hear the clunking, you get to the top, the clunking stops, you think the cart will rest at the top but it just tips over the edge………..

Well at the top of the slope the following will and can only happen and at a greater pace than the climb:

Now if all this speculation had been done with private money then we wouldn’t care.  The problem is that its been done with other people’s money i.e. THE BANK’S!  It’s the pulling of the plug by the bank that cause the rapid decline in property investment.  Let me show you by a clear train of reactions:

This is why property prices move up and down as explained in chapter 1.  Looking at the graph:

12pm being the beginning of the boom and 6pm being the beginning of the bust.  Now I really want you to understand this boom bust cycle.  It is the understanding of these fundamentals which will ensure that you NEVER lose in property investment.  Please re-read this chapter as many times as it takes so you understand how the boom bust cycle works.  Once you’ve understood this then we can move on to understanding yield which is the ultimate tool for any serious property investor. 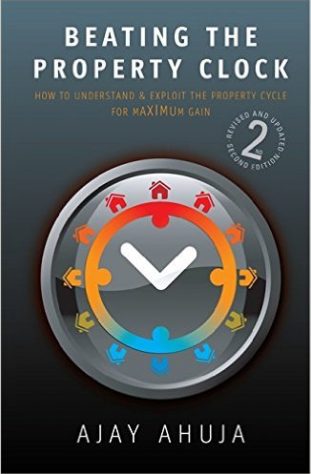